Animals, and us humans, are daily under attack by viruses and other pathogens. Fortunately, we are equipped with the Major Histocompatibility Complex (MHC) as an efficient and adaptable fighting mechanism to deal with these threatening events. This complex is encoded by the most polymorphic genes of the vertebrate genome, known as the Human Leucocyte Antigen (HLA) system in humans.The MHC gene variability in humans is thought to be selectively driven by pathogens, as pathogen-mediated selection promotes allelic diversity in the host as defense mechanism (1). It has been proven that the polymorphic character of the MHC is correlated to the resistance against parasites and viruses, as some alleles have a protective effect (2-8). In line with this, MHC heterozygous individuals have an enhanced resistance to infectious diseases compared to MHC homozygous individuals, since two different alleles can present a wider variety of peptides to the immune system (9-14). In short, it all comes down to one simple conclusion; the more HLA diverse we are, the more efficient our immune system is!

Interestingly, it seems that we are subconsciously guided by this immunologic advantage of MHC variation since we try to find a partner who is genetically different from ourselves. Us humans as well as animals use odor and visual cues to select an MHC dissimilar partner (15-19), and we even choose a perfume to enhance our own MHC genetic profile (20-22). In this subconscious selection process, heterozygous partners are preferred, and not only because they are considered more healthy and thus potentially better providers, but having a heterozygous partner also increases the odds of heterozygous offspring (23, 24). In line with this, it has been shown that sexual attractiveness of women towards their partner decreases when their partner is MHC similar, and these women also reveal to be sexually less satisfied, and are more likely to show infidelity, when compared to women that have an MHC dissimilar partner (19, 25). Also, the wish for children is lower in women with an MHC similar partner. 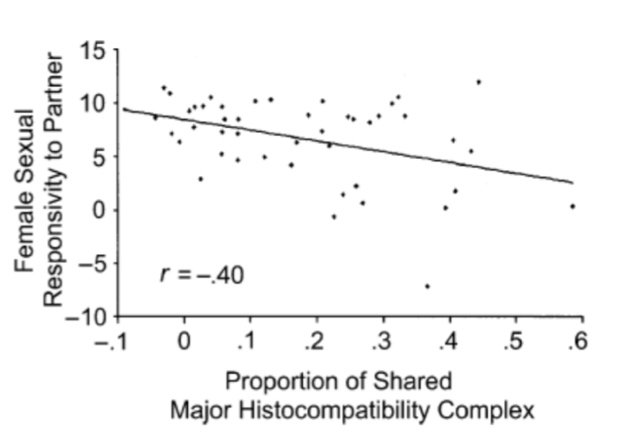 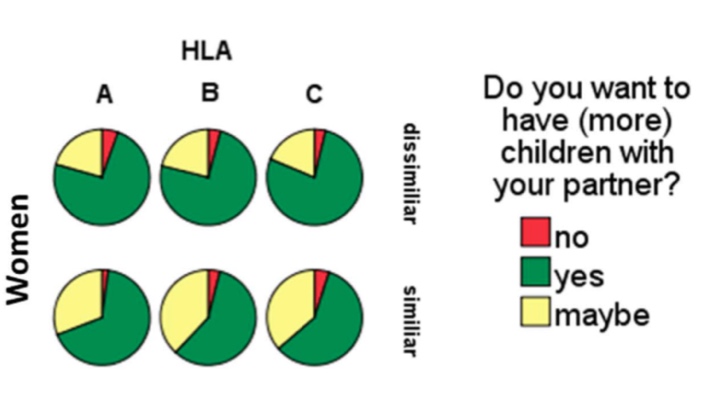 The impact of HLA similarity on the wish for children of women (Adapted from Kromer et al. 2016 (19)).

Males however, seem to be less choosy, since men’s sexual responsiveness is not different when being with an MHC similar partner as compared to being with an MHC dissimilar partner, underlining that mostly women are instinctively pressured in selecting an MHC diverse mate. Interestingly, it has been proposed that the MHC related mate preferences of women can be changed by usage of the contraceptive pill. In 1995, researchers in Switzerland performed the so called “sweaty t-shirt” experiment where female students were asked to rate the scent of t-shirts worn by male student for attractiveness. This demonstrated that females prefer the odor of males with different MHC genes from their own. However, when looking at the female students that were using the pill it seemed that the pill reversed this situation. Females using the pill actually preferred the scent of men with similar MHC (26). 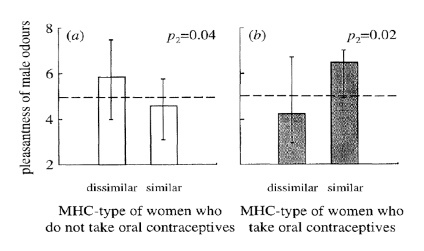 Having said this, it seems that the natural choice for an HLA diverse partner lies not only in the higher possibility of having a healthy spouse and offspring, but also lies in the regulation of the reproductive system itself. An increased number of epidemiological studies indicate that incompatibility between partners, rather than compatibility, seems necessary for efficient placentation and successful pregnancy. A 10-year prospective population study revealed that there is an  increased rate of fetal loss and reduced overall fertility among couples with matching HLA haplotypes or loci (27). Furthermore, in pregnant women it has been shown that the more HLA-A, -B, -C, -DRB1 and -DQB1 alleles are shared with the fetus, the higher the risk of preeclampsia (28). Nonetheless, the risk declines among women with normal to high exposure to paternal seminal fluid, suggesting that frequent intercourse before conceiving favors successful pregnancy (28-30).

All in all, although we think we select our partner based on an attractive face, charisma or wittiness, without us knowing, it also comes down to the fact that we are instructed by our instincts and our subconscious needs for healthy procreation. Especially women are led by finding an HLA dissimilar partner, most likely because women feel subconsciously a bigger need to invest in healthy offspring. Unfortunately, nowadays these instinctive drives can be disrupted by external factors, since for example use of the contraceptive pill can alter partner choice (31). So before going on a date, instead of only checking his or hers Facebook profile, check the HLA profile as well, it might prevent future heartbreak. 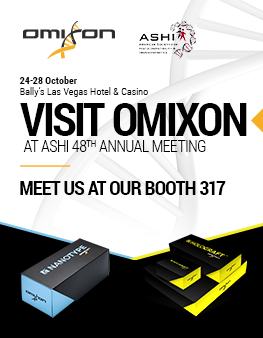