113,000 people in the United States are currently eligible to receive a transplant, but only about 36,528 transplants are performed each year due to a shortage of available organs. As a result, approximately 20 people die each day waiting for a transplant (1). Researchers have been exploring new technologies to increase the supply of organs in order to meet the demand for organ allocation. An interesting subject of study and experiment that has been ongoing, which will potentially help the scarcity of organs in transplantation, is xenotransplantation. Xenotransplantation, i.e., the transplantation of organs, tissues, and cells between different species (e.g. from pig to human) could offer an unlimited and prompt supply of transplantable organs. How close are we from advancing this modality to clinical transplantation? Let’s look at the history and what we have accomplished so far in this area.

The concept of xenotransplantation goes back 300 years or more with numerous clinical experiments since then (2). In the early seventeenth century blood transfusion from animals to human were performed, followed by skin grafts (xenograft) from various animals, with frog being the most popular in the nineteenth century. A solid organ transplant was first performed in the twentieth century, with numerous attempts to kidney transplants from chimpanzees and baboons. One successful attempt was by Keith Reemtsma and colleagues who transplanted a kidney from a chimpanzee in a patient that survived for nine months post-transplantation (2). The first heart transplant in a human ever performed was by using a chimpanzee heart. The heart proved not be the appropriate size to support the circulation and the patient died a couple hours after surgery (2). In 1966, the first chimpanzee to human liver transplant was performed, followed by a second attempt in 1992 when the patient survived for 70 days following a baboon liver transplant.

As initials attempts to xenotransplantation were from pigs and non-human primates (NHP), NPH were considered to have several disadvantages, with the main one being the higher risk of infectious disease (4). There are numerous advantages for pigs that make them a more suitable source of organs for xenotransplantation. They are an ethically acceptable source of alternative organs for humans, the organs can be available immediately and electively and the anatomy and physiology are very similar to human organs (3-4). In addition to organ transplantation there are many disorders that could be treated by xenotransplantation (pig-human) (Figure 1). 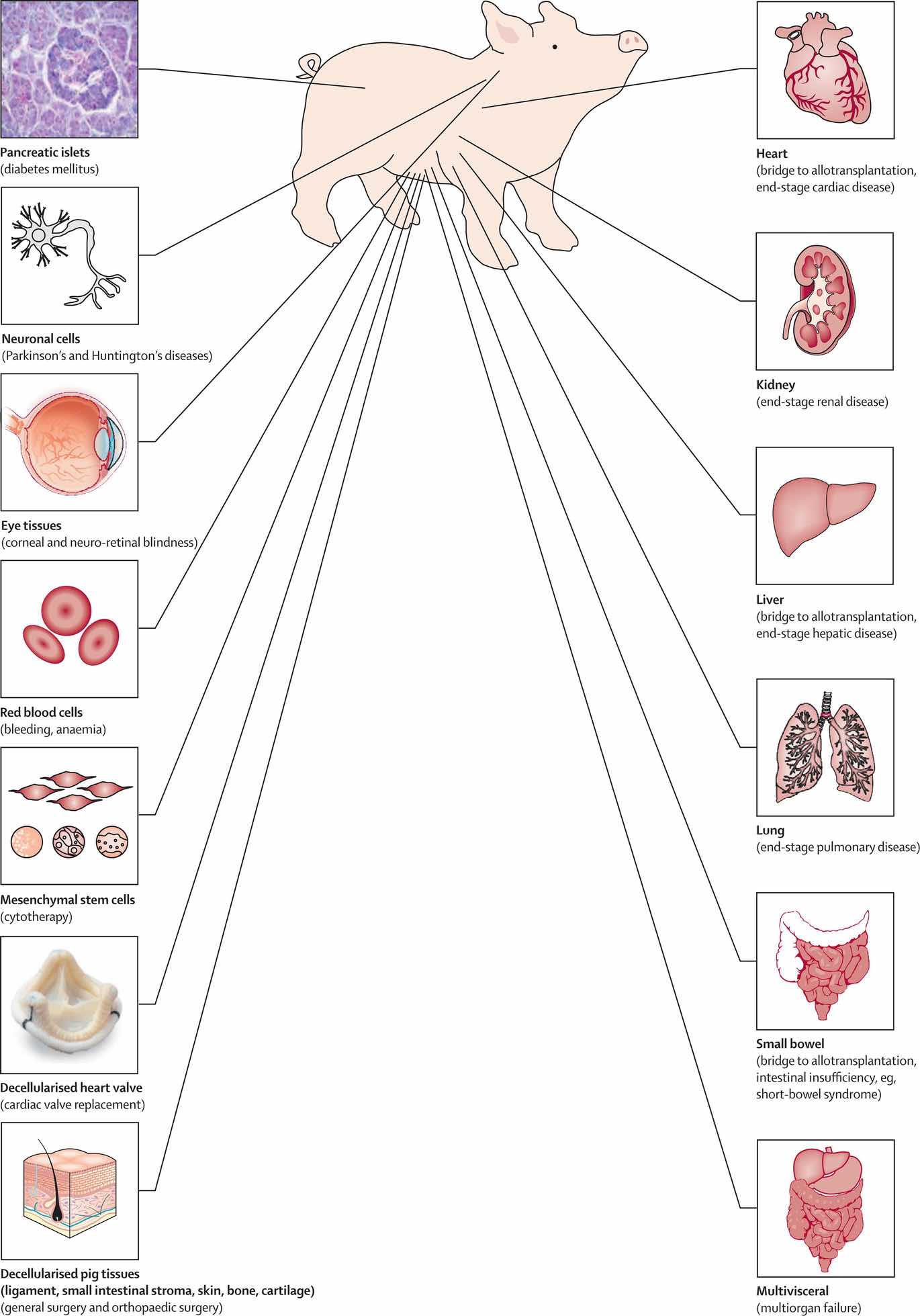 Figure 1. Disorders for which xenotransplantation is a potential therapy (8).

Even though pigs were considered a more suitable source of organs we know that from previous cases the graft survival was extremely short, presenting a major immunological barrier between pig to human transplants. To try to overcome this immunological barrier transplant researchers turned their attention to genetically engineered pigs. Genetic engineering of the organ-source pig has largely involved (i) the deletion of expression of one or more of the three key pig antigens, and/or (ii) the insertion of a human transgene that provided protection from human complement and/or coagulation activity (6). Deletion of expression of two or all three key pig antigens has been achieved by simultaneous knock-out of their respective genes (7). These new gene editing nuclease technologies that have made it possible to produce pigs with multiple genetic modifications simultaneously, and their timeline history are summarized in Table 1. 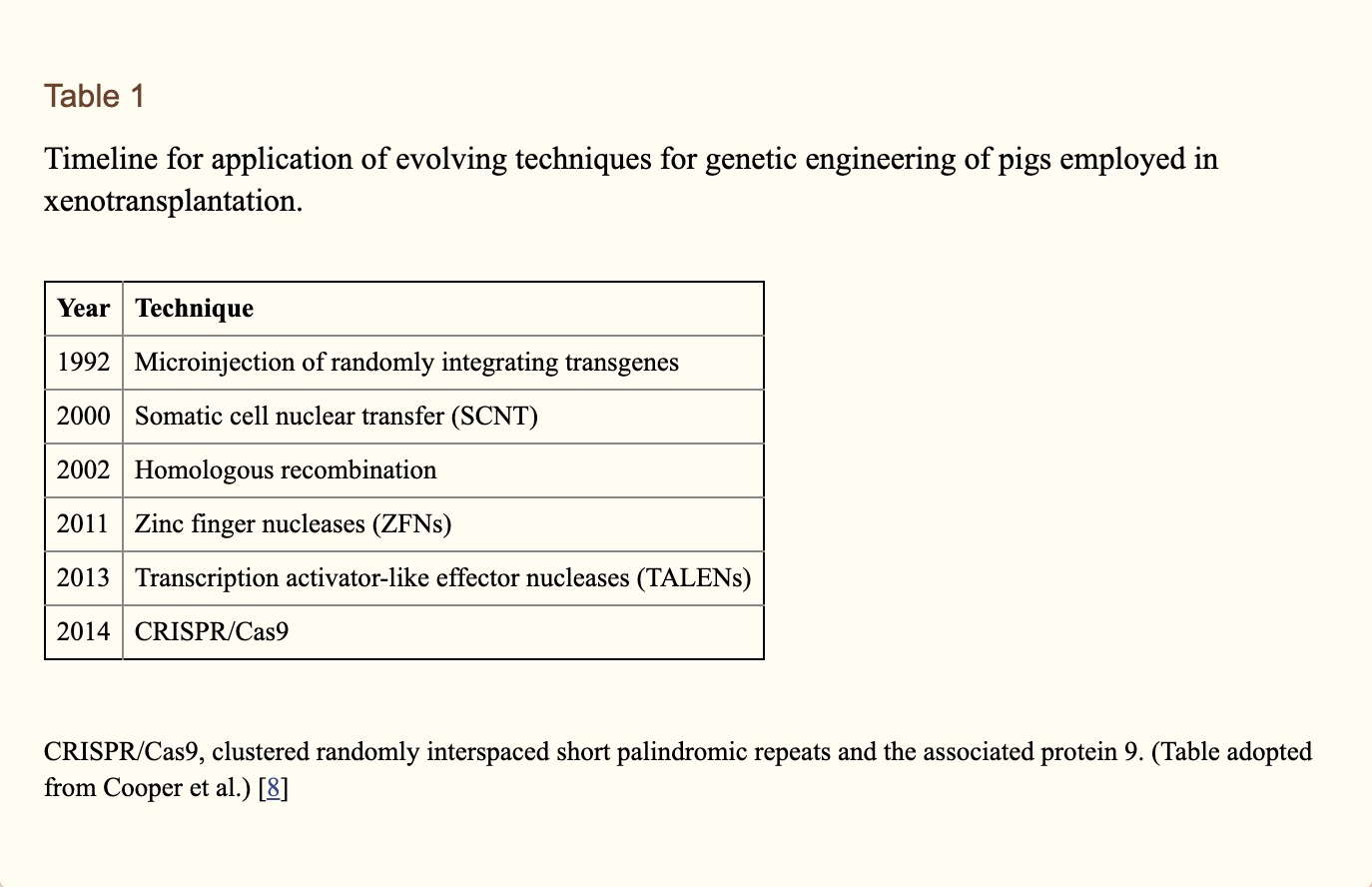 A more recent technology that has a tremendous impact on developing genetically modified pigs for xenotransplantation, is CRISPR (clustered regularly interspaced short palindromic repeats). In the early years, genetic engineering of pigs was performed by homologous recombination which might take longer than 2 years from cell work to pregnancy (10). Today, research groups can produce multiple gene knock-out or knock-in pigs using CRISPR technology, which leads to various genetic modifications including elimination of gene expression (10). There are now an estimated 25 or more genetic manipulations that have been carried out in pigs, with some pigs expressing five or six manipulations (6). Today, the survival of pig-to-non human primate heterotopic heart, kidney, and islet xenotransplantation has reached >900 days, >400 days, and >600 day, respectively (8).

With all the information gathered throughout all of the research studies and achievements in xenotransplantation, the time is approaching for the first in-human clinical trial. Currently there are clinical trials taking place of encapsulated pig-islet transplantation and of pig corneal transplantation (9). Researchers believe that organ transplantation clinical trials will follow once there is sufficient evidence in NHPs of consistent survival of the recipients of a life supporting graft for periods of 6 or 12 months in the absence of complications from over intensive immunosuppression therapy (8). With the increasing knowledge of the pig genome, researchers believe that genetic editing could also lead to organs that are a perfect biological match and that patients would not need to take the anti-rejection drugs that are known to cause numerous and often severe side effects.

Within the past decade, xenotransplantation research has made a great deal of progress, moving closer to potential clinical applications. The recent relatively rapid advances in the genetic engineering of pigs, the introduction and testing of novel immunosuppressive agents in experimental models, and the results of pig organ transplantation in NHPs demonstrates that this may be a viable and effective approach for transplantation. This research will continue to demonstrate the potential to help doctors provide transplant to more of the many waitlisted patients who are in greater need.