A fecal transplant is an experimental treatment in which fecal bacteria from a healthy individual are introduced in a recipient with the aim to establish a healthy diverse microbiome within the gut (1)(see Figure 1). This can be achieved by infusing the healthy stool solution via a tube through the nose, esophagus and stomach into the intestines of the patient. From the sounds of it anyone can imagine it is not a very pleasant treatment, to say the least. Therefore over time other options have been developed, like a fecal transplant via an enema (injection into the lower bowel through the rectum) or via a capsule containing freeze-dried bacteria, which has been introduced by a group in Boston in 2014 (2). Obviously, anyone would go for the latter treatment option. 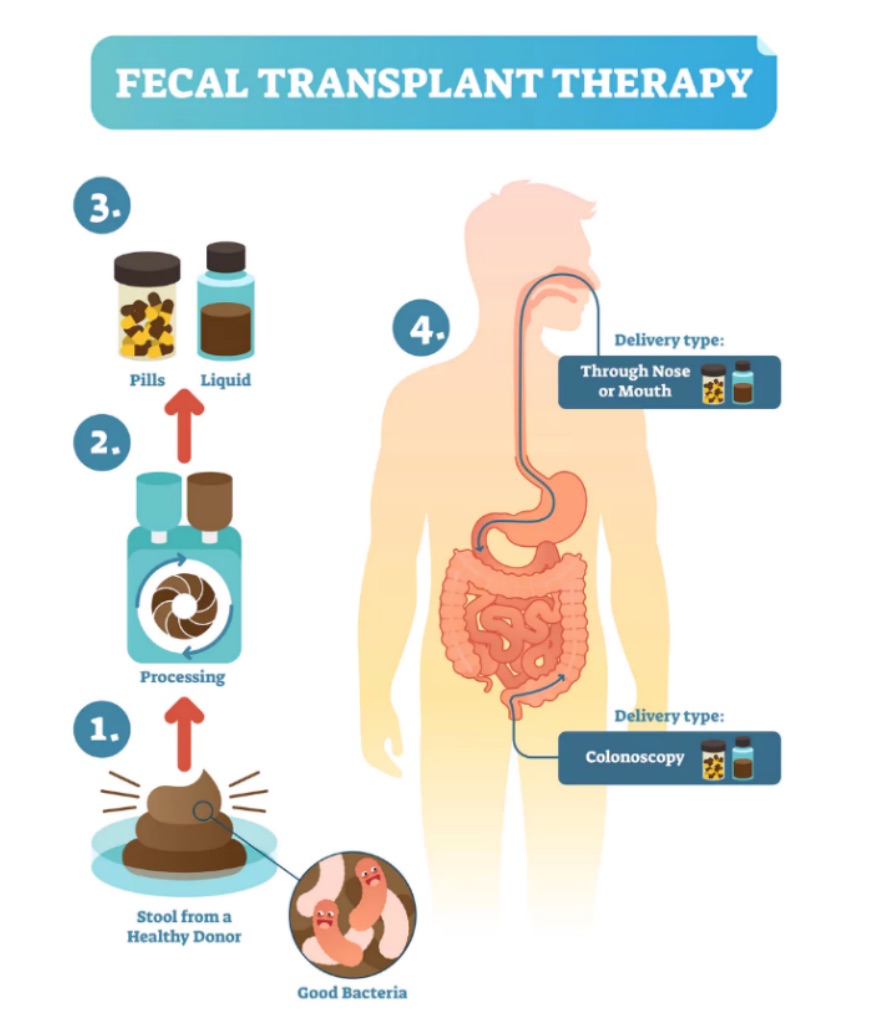 Figure 1: Fecal transplant therapy: taking healthy stool from a donor, and processing and delivering it to a sick recipient (picture is adopted from: https://theconversation.com/stool-transplantation-shows-promise-treating-cancer-therapy-side-effect-106657).

But in what case would you ever need to be transplanted with someone else’s feces? And how did we find out about the usability of this unconventional method?

It feels like ‘therapeutic poop’ is a recent development, however it was a Chinese researcher about 1700 years ago, who gave his patients with severe diarrhea, a ‘yellow soup’, containing stool and water. This ‘soup’ was taken orally which quite possibly is the reason why this treatment never really took off. Luckily, the delivery approach has evolved, and the first official fecal transplantation in humans was performed in 1958, although as treatment in animals, fecal transplantation has been successfully performed for over 100 years. For example, veterinarians treat horses with diarrhea by infusing them rectally with stool from healthy horses. Nowadays, fecal transplantation in humans is mostly used for treatment of gastrointestinal diseases, with recurrent Clostridium difficile infection as the most treated disease (3). This bacterium causes severe diarrhea to life-threatening inflammation of the colon and in recent years Clostridium difficile infections have become more frequent, severe and difficult to treat. Normally antibiotics are the main agent for treating bacterial infections, however while antibiotics eradicate pathogens, they also kill the good bacteria in the gut, creating an imbalance in the microbiome. In addition, the use of antibiotics has increased the occurrence of antibiotic resistant bacteria. By introducing a healthy diverse microbiome using fecal transplantation, the imbalance can be restored and the number of antibiotic resistant bacteria reduced (4).

For recurrent Clostridium difficile infection, fecal transplantation has been considered the only true effective treatment, and therefore the Netherlands has opened a donor feces bank as the first ‘poop bank’ in Europe where people can donate their own feces(5). Go Netherlands!

A recent death after the treatment pushed the FDA to step in and specify that both donors and their stool should be screened for the presence of “multidrug-resistant organisms.” How important thorough screening of qualified ‘poop donors’ is, has recently also been highlighted (6), as a “super-donor” has been proposed to describe donors whose stool results in significantly more successful fecal transplant outcomes than the stool of other donors (see Figure 2). 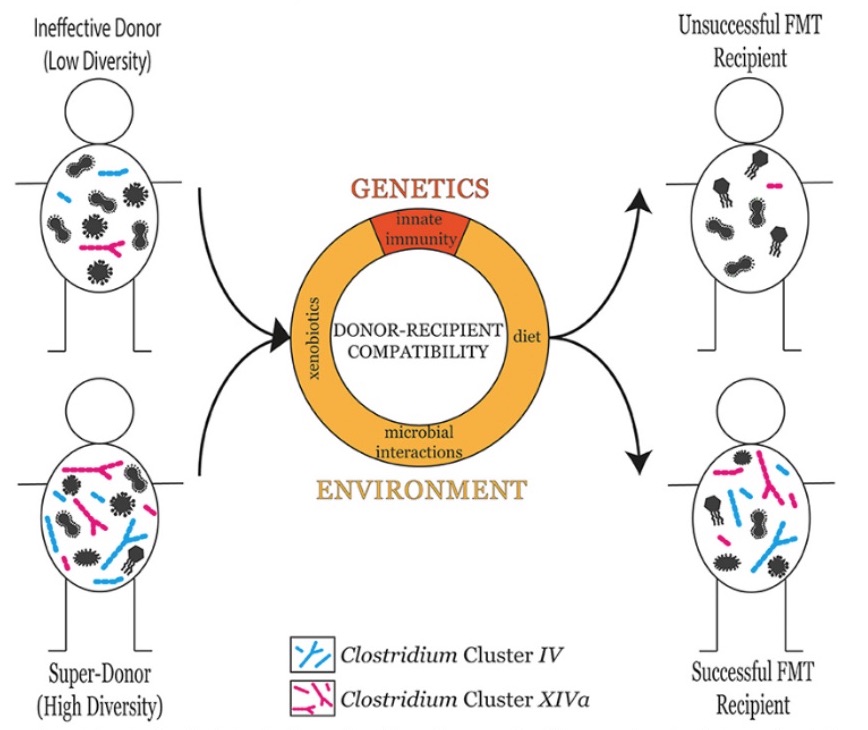 Figure 2: The microbial diversity of the donor is a good predictor of fetal transplant success in the recipient. However, donor-recipient compatibility also plays an influential role in determining fetal transplant success. Donor-recipient compatibility can stem from genetic factors such as differences in innate immune responses, or environmental factors including diet, xenobiotic exposure, and microbial interactions (6).

Interestingly, more and more groups are focusing on the therapeutic effects of fecal transplantation (see Figure 3) and have discovered that many other elements of the body and even brain can benefit from this odd treatment. 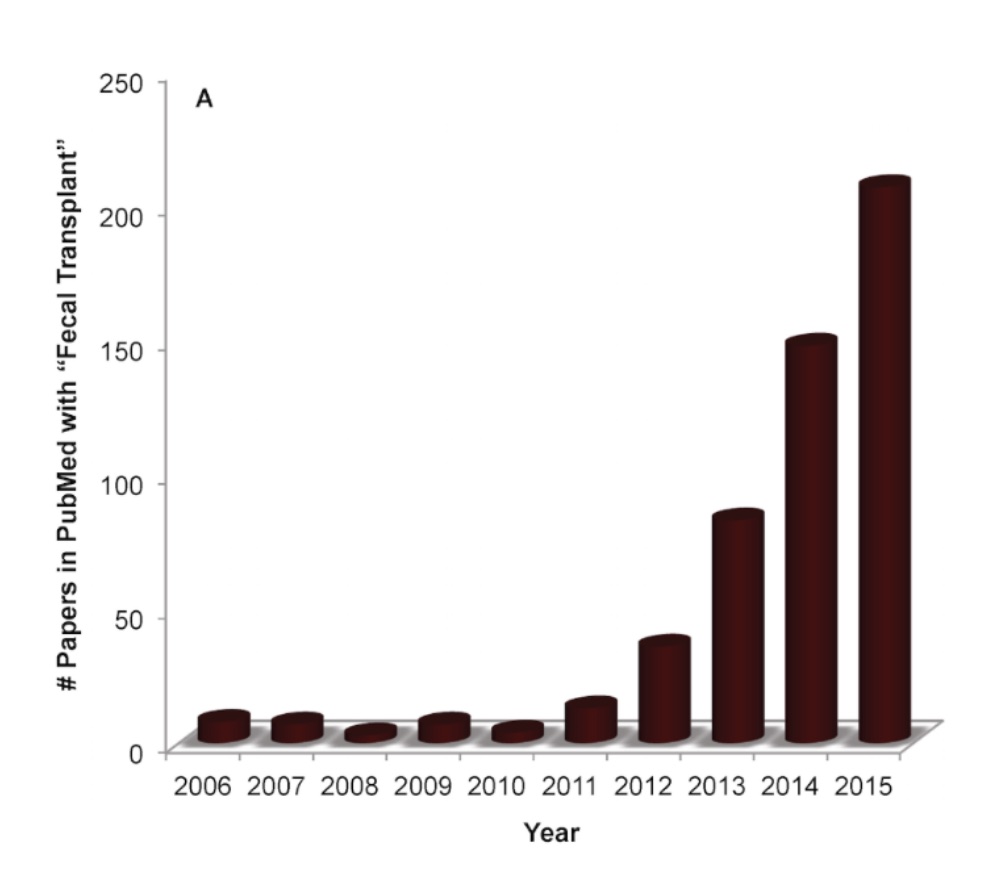 Figure 3: The rapid rise in publications on fecal transplants in the PubMed search service, particularly between 2012 and 2015 (graph is adopted from: https://theconversation.com/stool-transplantation-shows-promise-treating-cancer-therapy-side-effect-106657).

It is well recognized that the bidirectional communication between brain and gut-microbiota is essential to maintain homeostasis, moreover findings suggest that the gut-microbiota is involved in the pathophysiology of numerous mental disorders and neurological diseases (7). Very recently it was shown in mouse models that fecal transplant treatment could diminish cognitive deficits and reduce the brain deposition of amyloid-β, suggesting that fecal transplantation may be a potential therapeutic strategy for Alzheimer’s disease (8).Moreover, mice with an altered microbiota often display depression-related behaviors, and the gut microbiota composition is altered in depressive patients and animal models (9-11).

A study published this year in Nature Microbiology used a different approach by sequencing DNA to analyse microbiota in the feces of more than 1,000 people enrolled in Belgium’s Flemish Gut Flora Project. The team then correlated different microbial classes with the participants’ quality of life and incidence of depression, using self-reported and physician-supplied diagnoses. They validated the findings in an independent cohort of 1,063 individuals in the Netherlands’ LifeLines DEEP project (12). The researchers found that two kinds of microbes, Coprococcus and Dialister, were missing from the microbiomes of the depressed subjects, but not from those with a high quality of life. The finding held up when the researchers allowed for factors such as age, sex, or antidepressant use, all of which influence the microbiome.

In a study from Arizona State University, researchers investigated the impact of fecal transplant on gut microbiota composition and Autism Spectrum Disorder (ASD) symptoms of 18 ASD-diagnosed children (13). Investigators reported that gastrointestinal symptoms and ASD behavior improved. Remarkable was that two years post-treatment, most improvements in gut microbiota were maintained, and autism-related symptoms improved even more (See Figure 4). A professional evaluator found a 45% reduction in core ASD symptoms (language, social interaction and behavior) at two years post-treatment compared to before treatment began. Last but not least, the parents reported a slow and steady reduction of ASD symptoms during treatment and over the next two years (13, 14). Of course, the main question that comes up is; did the autism symptoms decline because the gastrointestinal discomfort was relieved, and the children simply felt better? Additional research is most certainly needed and already planned, including a placebo-controlled study which will involve adults with autism. 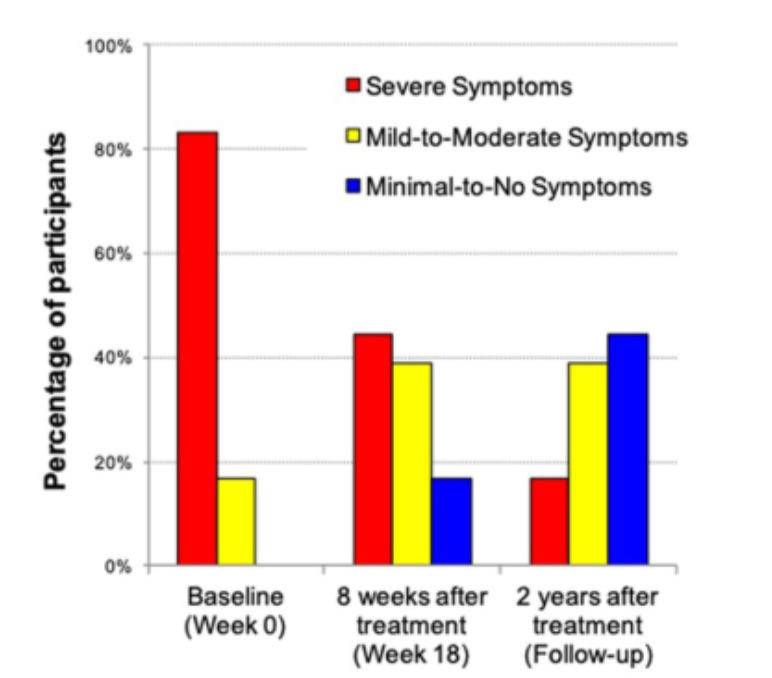 Figure 4: Childhood Autism Rating Scale (CARS) rated by a professional evaluator are shown. At the beginning of the open-label trial, 83% of participants rated in the severe ASD diagnosis per the CARS. At the two-year follow-up, only 17% were rated as severe, 39% were in the mild to moderate range, and 44% of participants were below the ASD diagnostic cut-off scores (14).

Following the development of bioinformatics and gut microbiota research in the 21st century, scientists have established that the human being is a superorganism carrying billons of microorganisms, of which the vast majority reside in the digestive tract (called gut-microbiota) and are considered to be the most important in the human body. The microbiota contains 300–3,000 different species, whose total number exceeds 1014, which is almost 10 times the total number of nucleated human cells (15). It became clear that these microbiota have established an interdependent and mutualistic relationship with humans, so it does not come as a surprise that there is symbiotic interaction between gut-microbiota and both physical and mental wellbeing. Luckily, we can improve our microbiota status with for example probiotics, prebiotics, a healthy diet, and a healthy lifestyle, however in some cases these interventions are simply not enough. Modulation of the gut-microbiota by therapeutic treatment as for example with fecal transplantation, opens a promising and relatively easy strategy for gastrointestinal, and as highlighted in this blog, many mental diseases. Nowadays, fecal transplantation is still experimental, and more population studies are needed, however we can’t ignore the fact that many hospitals are considering to use this unconventional method as a treatment (and that some already do) and the numerous studies which have shown successful results towards cognitive and behavioral disorders. So, my advice is, let’s keep an open mind, an open heart and most importantly, let’s not forget to follow your gut-feeling! 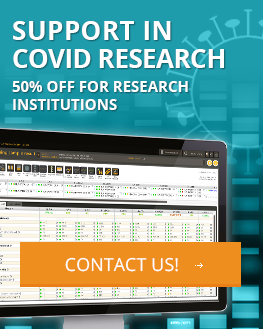