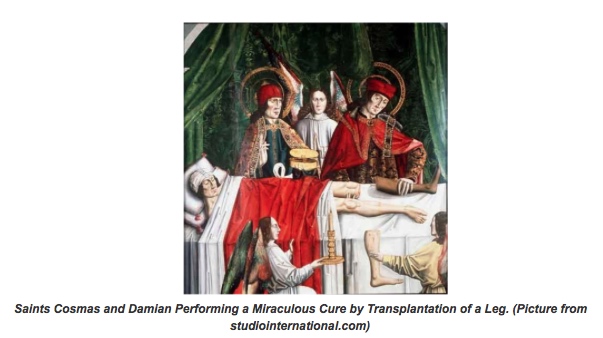 A story of the Roman Catholic history reported the third-century saints Damian and Cosmas replaced a gangrenous leg of the Roma deacon, Justinian, with the leg of a deceased Ethiopia man (1). The evolution of transplant can be traced from ancient mythology, through early religious writings to modern era. We can categorize these as interesting or bizarre, but they all have improved and most importantly saved lives and continue to do so. Corneal transplant, toe-to-thumb transplant, face transplant, penis transplant are some of the examples that demonstrate the evolution of modern medicine and science in transplantation (9). Now, let’s remember how some of these examples took place…

The first human to human transplant was conducted in Czech Republic in 1905 by Eduard Konrad Zirm, an ophthalmologist (1). The recipient was a 45-year-old farm laborer who had sustained severe chemical burns while cleaning out the chicken coop with lime. The living donor was an 11-year-old boy whose eye had been blinded by a penetrating injury to the sclera. The donor’s eye was enucleated prior to the transplant and one of the two corneas was utilized to provide two donor grafts (1). The graft on the right eye failed, but the graft on the left eye survived and improved the patient’s visual acuity over time. Since the first successful corneal transplant, there have been several achievements that allowed improvements of the surgical method, technology, instrumentations and the understanding of corneal biology. Just in the United States alone, each year more than 33,000 people have undergone corneal transplant to replace disease and/or injured corneas (2).

“The king of the digits”; as your thumb is referred to. Losing a thumb is the one way to debilitate the hand almost entirely. In 1969, the first toe-to-thumb transfer was conducted using a microsurgical technique in human (3). One’s great toe is only partially used for a little more than balance. When the donor toe is selected, the donation is usually made from the non-dominant foot. Typically the left foot and the patient will later learn to balance with the heel of the foot. Scientists have used microvascular transplantation for thumb reconstruction after traumatic amputations. This technique has been performed in children with various conditions, such as congenital thumb absence, constrictions ring syndrome and symbrachydactyly (4).

The world’s first partial face transplant took place on November 2005 by a team of surgeons including Jean-Michel Dubernard, Bernard Devauchelle in France (5). Isabelle Dinoire’s face was mauled by her Labrador retriever. Dinoire underwent a 15-hour long surgery to transplant the nose, lips and chin from a female donor. The transplant was successful, however she unfortunately passed away in 2016 from cancer at the age of 49 (5). In 2010, a 31-year-old male underwent the first full face transplant in Spain. The patient accidentally shoot himself in the face and due to his injuries he was unable to eat and breath on his own. The team of surgeons transplanted the entire face, including jaw, nose, cheekbones, muscles, teeth and eyelids from a donor. The patient regained 90% of facial functions and was able to eat and drink on his own (6) which is an incredible improvement to his quality of life. As of August 2018, more than 40 face transplants have been performed around the world (5).

In September of 2006 in China, the world’s first penis transplant was performed. The recipient was a 44-year-old male that had sustained the loss of most of his penis in an accident, which had affected his quality of life severely (7). The donor was a 22-year-old brain dead male from which the parents agree to the donation. The transplant was a success; unfortunately the patient and his wife suffered psychological trauma as a result of the transplant, and the surgery was reversed 14 days later. In March 2018, the most extensive penis transplant which included the entire penis, scrotum, and the lower abdominal wall was conducted in Johns Hopkins Hospital. This was the fourth and most recent penis transplant in the world (8).

Modern medicine has made an extraordinary advancement in transplantation and from this we have been able to perform medical breakthrough transplants in the last century. Stated above are several examples of transplant cases that have marked the history of transplantation. History is constantly being made with kidneys, pancreas, hearts, lungs, livers and bone marrow transplants worldwide. All different transplants, not only save lives, but also improve the quality of life by providing an opportunity to see again, to have facial function and forms restored, full mobility to limbs and sexuality. As we have future scientific innovation and advancements in transplant, we will continue to have interesting cases to recap and how they changed and affected an individual’s life. At the same time several ethical questions and concerns have been raised on how certain types of transplants can affect an individual’s life (e.g. brain transplant), but that’s a discussion for a future post….