Omixon is very proud to announce an exclusive licensing agreement with The Children’s Hospital of Philadelphia (CHOP) to commercialize a new Next Generation Sequencing (NGS) HLA genotyping assay, for use on the Illumina® MiSeq sequencing platform.

The Illumina-specific HLA genotyping protocol was developed by Professor Dimitri Monos, Director of the Immunogenetics Laboratory in the Department of Pathology and Laboratory Medicine at CHOP and his group. The assay provides targeted amplification and library preparation reagents for the whole gene coverage of HLA-A, B, C and DQB1, and partial coverage for HLA-DRB1. “This new approach addresses a 60-year-old problem,” says Professor Monos. “Since the discovery of HLAs in the early 1950s, it has been a challenge to accurately and thoroughly characterize HLA gene sequences. We have now used next-generation sequencing tools to significantly advance HLA typing.”

HLA genes are the most complex gene family known in the entire human genome. Gene sequences for HLAs are extremely polymorphic – highly variable – to a degree not adequately captured by conventional typing tests such as SSO/SSP or Sanger Sequence Based Typing (SBT). SBT frequently provides ambiguous and/or limited results, by sequencing only part of the HLA genes and failing to distinguish among different alleles due to difficulty with resolving the phasing of those alleles. In addition, preliminary testing is frequently followed by a second level of reflexive testing, adding expense and time to the HLA typing process. “Since sequence-based typing by Sanger was adopted for the characterization of the HLA polymorphisms, the number of known HLA alleles has been growing exponentially. This has actually enhanced frustration as initial typing results include an increasing number of ambiguities and labs need to resort to additional reflexive testing in order to fully resolve them. This is the first technology that gives results free of any current or future ambiguities”, says Professor Monos.

While the potential of NGS to provide the first fully resolved, nucleotide level characterization of HLA has been understood for several years, it has been a challenge to convert this potential into a practical solution that would be both easy to work with and fully exploit the benefits of NGS technology. To address these challenges, Professor Monos and colleagues developed a new protocol for HLA genotyping using NGS data from the Illumina MiSeq platform. “This is a new, disruptive technology, with the potential to transform research and clinical practice, in transplantation and other fields,” said Robert Doms, Pathologist-in-Chief at CHOP.

The resulting Illumina data provides even and deep coverage, allowing Omixon Target™ HLA Typing software to fully resolve phase for both alleles at each locus and provide completely characterized novel allele sequences. Dr. Attila Berces, Founder and Chairman at Omixon describes the technology “This assay solves many challenges including preferential allele amplification, uneven amplification of key exons and fragment size problems that most people who develop HLA assays struggle with. It simply gives the most beautiful HLA data we have ever seen.” As part of this collaboration, Omixon developed assay-specific software, which gives scientists higher confidence in the results and the first phase is already underway with five additional labs being trained in the protocol developed by the Monos lab. Omixon and the participants intend to publish the results of the blind study in a leading peer-reviewed academic journal to facilitate confidence in the adoption of NGS for HLA genotyping among the wider clinical community.

The long-term objectives are clear to Dr. Berces, “This collaboration forms a key component of Omixon’s long term vision for HLA and immunogenetics. HLA will play an increasingly important role in disease and safety associations, and therapeutic selection in personalized medicine. With growing applications of HLA, the size of the HLA typing market will also grow substantially.” Continuous improvements to the assay and the software are also part of the long-term goal of this collaboration.

Visit PRWeb and GenomeWeb for more… 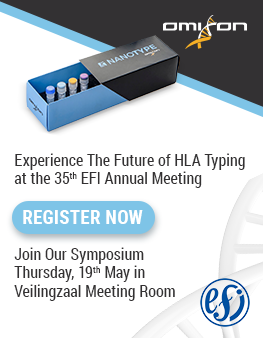 10/05/2022
Written by Libor Kolesár, PhD HLA tissue typing is like a constantly changing and evolving organism. During the era...